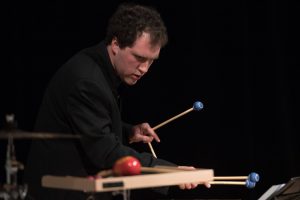 Nowadays he is playing mainly as a chamber musician with DRUMARTICA – Slovenian percussion. Together with Simon Klavžar, Bogolin has performed in many important classical music venues in Serbia, Italy, Germany, Luxemburg, Russia, USA, China, Croatia, Spain, Canary Islands, Slovenia, Netherlands, Belgium and so on.

Currently, he works as professor on Konservatorij za glasbo in balet Ljubljana. In addition to his job, he is regular guest on modern music festivals, masterclasses and clinics home and abroad.

He is an endorser for ADAMS Musical instruments and Innovative Percussion Mallets.