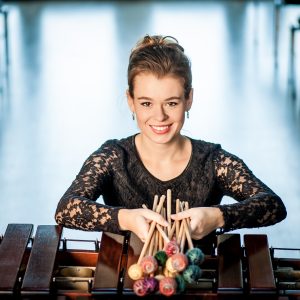 Marianna Bednarska is a young polish percussionist. She runs an active artistic activity, not only as a soloist but also as a chamber music performer, orchestra musician and percussion teacher. She is being regularly invited to international music festivals and cooperates with recognized personalities of the musical world.

Her musical language exposes the richness of musical styles, that combine various performance traditions and diversity of musical eras with inventive elements of musical theater and new technologies. She works actively with composers around the world on new compositions with a mission to introduce an innovative dimension of performance to the art of classical percussion.

She performed in Europe and USA making her debuts as a soloist at international music festivals, such as Lucerne Festival or Davos Festival. She was also invited to perform at the Gstaad Menuhin Festival, Budapest Spring Festival, Festival Archipel, Percussion Art Society Festival in China, Festival du Jura, Festival du Périgord-Noir and the Eurocuivres Festival.

In 2014, as the first percussionist in the history, Marianna Bednarska recorded a complete set of all Four Marimba Concertos by Anders Koppel in the debut album Marimba Concertos, (DACAPO 2014) which received extremely positive reviews, both in Poland and abroad (including The New York Times, Gramophone and Deutschlandfunk). As a soloist, she also took part in recordings for Bayerische Rundfunk, the Polish Institute of Music and Dance and PWM Edition in the artistic project 100 out of 100. Musical Decades of Freedom, which was honored with 2 Fryderyk Awards 2020 of the Polish Phonographic Academy.

She was awarded with artistic scholarships in Poland, Switzerland and Germany (i.a. Swiss Excellence Government Scholarship, Kunststiftung Baden-Württemberg, Crescendum Est Polonia). In 2013, she received the Polish-Danish Friendship Award for her exceptional artistic activity connecting both countries, and in 2017 she was nominated for the Award Koryfeusz of Polish Music 2017 in the category Debut of the Year.

Marianna Bednarska conducted international percussion masterclasses in Germany, Switzerland, France, Italy, Portugal, Poland and Bulgaria. She is a permanent lecturer at the Eurocuivres Academy and a jury member at international percussion competitions.
She is also a supplementary musician of the Orchestre de la Suisse Romande and cooperates with musical ensembles, such as Eklekto or Paris Percussion Group.

She began her artistic path at Karol Szymanowski Music School in Warsaw with the piano which was soon replaced by classical percussion instruments. After the graduation she completed her Bachelor Degree at the State University of Music and Performing Arts in Stuttgart and the Master Degree together with Postgraduate Studies at the University of Music in Geneva.

Marianna Bednarska cooperates with the Yamaha Company as a Yamaha Artist and with the Kolberg Percussion Company as a Kolberg Mallet Artist.