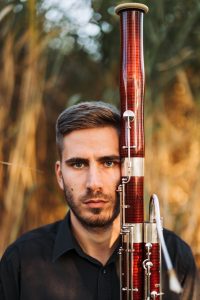 Mihael Mitev is a Slovenian bassoonist. He started his musical education at the early age with his father Zoran Mitev, with whom he later studied in conservatorium and Academy of music in Ljubljana where he finished his bachelor studies. During bachelor studies, he spent a semester studying in Vienna at MDW with Richard Galler. After Mihael finished his bachelor studies, he continued his education at Zürcher Hochschule der Künste with Giorgio Madolesi, where he finished master studies. He attended masterclasses with professors such as: Andrea Zucco, Bence Boganyi, Robert Gillinger, Gustavo Nunez, Stefano Canuti, Pedro Silva ect. Currently he is a solo bassoon in Slovene National Theatre Maribor.

During his musical career Mihael was very successfully attending national and international competitions, latest being the ARD music competition 2019 in Munich where he reached the second round of the competition. On national competition TEMSIG he was the prize for best interpretation of Slovenian work in 2015 in woodwind quintet and 2016 as a soloist.